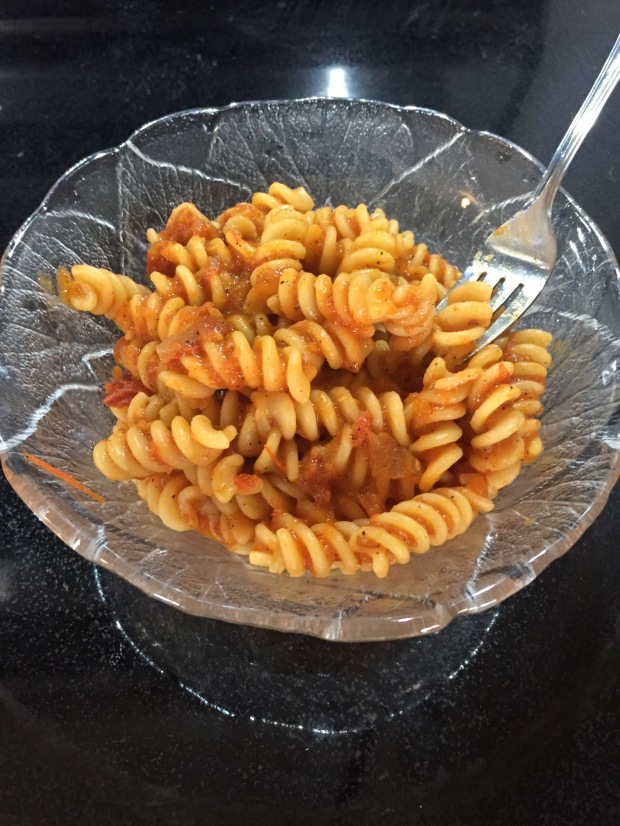 I’ve never been a big fan of the “holiday” type meals, and by those I mean the traditional carrots, mashed potatoes, brussels sprouts etc. Don’t get me wrong, I love vegetables but I’m just not a fan of them cooked like that, or those particular vegetables. Except potatoes, they may be my favourite vegetable but I don’t see why anyone would want them mashed when you can have fries or chips. I also loathe gravy, so there really is nothing for me in the way of traditional holiday foods, so when the time comes around, I cook something a little different. This year we had tempeh bacon and green lentils cooked with assorted vegetables and barbecue sauce. I can’t tell you how good it was! I was very happy to have a meal adjusted to my taste and tempeh never lets me down.

Now that the week is here and everything is back on track I wanted to get things going with a pasta recipe. I’m always in the mood for pasta, though lately I’m loving oil-based sauces, but I’ve had the idea for this Arrabiata sauce in my head and I knew it was time to get back to red sauce. I love spicy. Can’t get enough of the cayenne. Arrabiata is the perfect sauce for the spice lover and I’ve come up with a fairly simple homemade recipe that uses spices rather than fresh cayenne to give it heat. The flavour is not compromised and I knew I didn’t want to use fresh cayenne peppers because I know how much it hurts when you touch the seeds. Adding the spice really gives the pasta flavour, without changing the taste the way a hot sauce would, so pulling out the spice jar is the way to go here. Also, this recipe makes a ton (around 7 cups) so you’ll get multiple servings out of this instead of just one dinner. You can also freeze your extras to use at a later date. Alright I think I’ve done enough talking here and it’s about time to get to this recipe so here it goes:

Heat your oven to 400F. Line a baking sheet with parchment paper then cut the centre and stem out of your pepper and pull out any of the white parts inside. Place it face down on the baking sheet. Then with your tomatoes, cut off the top parts (with the greens) and remove the hard stem from the middle. Place these face up on the baking sheet. *Alternatively you can also used jarred roasted red pepper, around 3/4 cup, and canned crushed tomatoes, using about 3 1/2-4 cups. If you are using the fresh vegetables when they are prepared they should look as follows:

Cook these for 10-15 minutes. When you remove them let them cool for a few minutes before you handle them. In the meantime, cut your onion and garlic and add them to a large saucepan along with the olive oil and cook for 2 or 3 minutes.

Add the tomatoes, (including the sun-dried tomatoes, which you should chop a bit before you blend), pepper, flour and onion mixture and blend until it is mostly smooth. Return it to the pot and add the tamari, vinegar, and spices put it on medium high heat and bring it to a boil. Reduce the heat to medium low and you’ll want to let this cook for at least a good 20 minutes uncovered, giving it occasional stirs.

You can cook some pasta and eat the with the sauce right away or save it for later.

Hello! If you’re looking for good recipes, advice, and general information on all things vegan, you’ll find it here. I like to try all kinds of things so you’ll find a wide variety of recipes-from junk food to delicious health food and stuff that’s in the middle! Check out the recipe page for loads of inspiration and the about page for helpful tips!

Hi! I love sharing vegan food, but many recipes are also sensitive to common food allergies and intolerances, like gluten, nuts, soy and occasionally oil!

Hey! If you like what you see here, why not subscribe? If you don't that's ok too :)